The organization that we now know as the Mercedes-Benz Club of America had its beginnings in the mid-1950s. As hard as it is to believe given the popularity of the brand today, in 1952 only 36 new Mercedes-Benz cars were registered in the United States!  By 1955, there was enough interest in Mercedes-Benz that two groups in different parts of the U.S. started clubs. The group in the East, led by Dr. Milton Allen, requested permission from Stuttgart to use the name and trademark.  The second group was in Illinois and consisted of members of the Mercedes-Benz Club of Great Britain.  This group, which was led by Lorentz Knouff and Don McCray, contacted London and asked to split off and to become a separate unit.  Both clubs moved forward, with the Eastern group growing more rapidly, and the Chicago group remaining smaller.

Each club had somewhat different goals, with the Illinois group being more interested in the pre-war classics, and the New Jersey group being more interested in contemporary models. The process of merging the two clubs is beyond the scope of this look at our history, but by April 1959 the merger was completed with the organization now being named the Mercedes-Benz Club of America.  At that time there were 20 active sections and over 1400 members.

Our local group was founded in 1960 under the name of Northern Ohio Section, and by the end of 1960 it was known as the Cleveland Section.  In 1989 the name was changed to the Western Reserve Section to better reflect the boundaries of our members.  Among the leaders of the section during its founding were Sten Melin, Frank Baker, and Merrill Young. 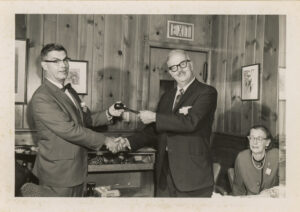 As time passes, it is easy for much of the section history to be gone or forgotten.  We had the good fortune to be contacted by Lee Will, who unearthed some photos from the early days of the section.  His grandfather, Merrill Young from Gates Mills, was a founding member who also served as the section president in 1963. 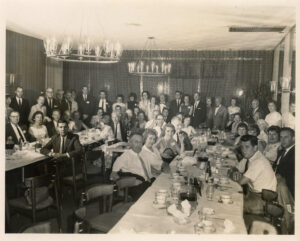 This first set of photos were taken at a section meeting when Mr. Young took office as president and received the gavel. It is possible that it is being presented by his predecessor, Frank Baker? Also shown in the photo is Merrill’s wife Henrietta, who unfortunately passed away in December 1964.

The 1963 Christmas party was held at Ottina’s 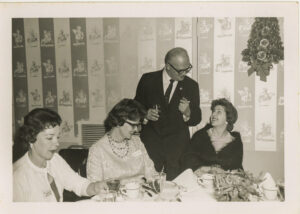 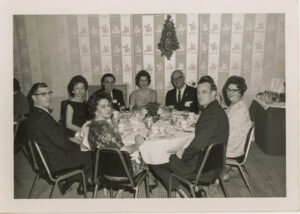 The Youngs hosted a well-attended picnic at their home in Gates Mills in August 1964. How much fun would it be to see all of those SLs and Finbacks at an event today! 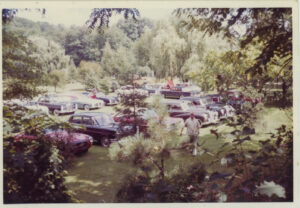 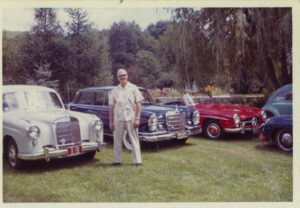 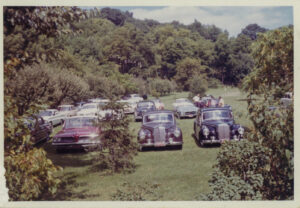 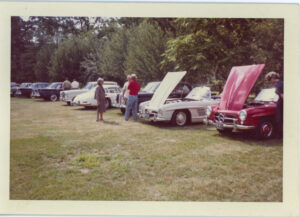 The photo above shows Merrill Young and his wife Hilda in their 190SL; they were married in May 1965. It was taken in the summer of 1965 in front of the Youngs’ home in Gates Mills, the site of many club activities.

A few fun facts from the era…

Section meetings were held on the second Friday of the month

Interested in joining the club? New members submitted a petition and needed the recommendation of at least one member to be accepted.

The 1965 member registry lists 84 section members, many of whom listed spouses or significant others as associate members. A thriving group in the 60s!

There is a gap in our list of section presidents from 1969-1974. If you can help to fill in the blanks, contact us at wrsection@gmail.com

Meet new friends, have fun and enhance the enjoyment of your Mercedes-Benz! Whether you're interested in technical resources or social events, membership in MBCA has it all: car shows, rallies, auto cross, holiday parties, tech sessions...
Continue reading >>